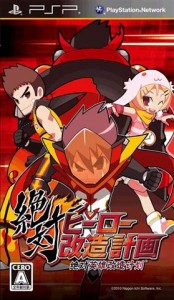 Japan 1 (NIPPON ICHI SOFTWARE) Inc. production, distribution, scheduled to be launched in spring 2010, exclusively by the PSP handheld. By well-known SRPG â€œâ€ Devil Chronicles â€œseriesâ€ production team is prepared to fight to create new signs labyrinth RPG series, role-playing original new work: â€œabsolutely heroic transformation planâ€ (Zettai Hero Kaizou Keikaku). The most significant feature to make is: let the hero from an ordinary person transformed into a hero to save the world, players need only to all parts of the body through a variety of components and equipment to carry out strengthening can be achieved. The maze game is not static, but will have to change as players enter each time with the layout. At present for the official website has opened and released a promotional video and the latest multi-stage screen for the players you refer.