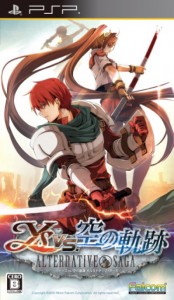 New for PSP “Ys-to-air of the track: Choice of Legends” (Ys vs.Sora no Kiseki: Alternative Saga) is a collection of the company’s two popular works Falcom “Ys” and “The Legend of Heroes: Sora no Kiseki” which People start with the debut of a series of works across the gap of a high-speed action game hot play against the game of “Ys 7” (Ys Seven) used avoidance and defensive combat system based on high-speed, combined with jumps and other elements players can battle in the vast arena to start utilizing a high level of poor play against.

Work “on the air the track of Ys: Choice legendary” battle arena, there would be included before the “Ys” series and “The Legend of Heroes: Sora no Kiseki” series debut as a fighting arena area, but will have a stage in the battle variety of trap body, for example, that the floor collapsed, etc, to make the fight more stimulating. In addition, this will correspond to the Ad-Hoc PSP console online features, so players can come with up to four people to play against the same music, and play against rule from one pair of 1.1 on the 2-1 pairs of 3,2 to 2 are , like the two series of players who may wish to wait for the official announcement further!