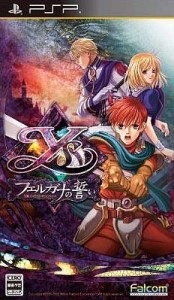 PSP PSP version of â€œYs: The Oath Fergana,â€ in addition to all inherited PC version, but also an additional large number of original new elements. All debut role (over 30) and the voice of performances throughout the event scenes, and go wild in blue, and other well-known seiyuu Aya Hisakawa to perform; as the game progresses, will provide a â€œmuseumâ€ function, can collect and view video , illustrations and other content; additional â€œDifficult choicesâ€ and â€œwhen the mode of competition,â€ and other functions, and will be opened up to the movie, set painting, illustrations and other content for the player free to view. Finally, when the player after this clearance, but also appears to challenge a number of powerful leaders to enjoy fighting the enemy BOSS fun â€œwhen competing modelsâ€ (Time Attack Mode). The purpose of the clearance under 2 weeks, and would be one week head clearance, various state continue the game.