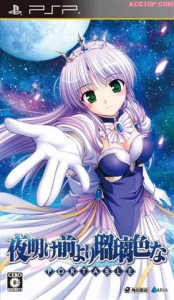 â€œNight they agree to anything of glass color: Portable Editionâ€ (Yoake Yori Ruriiro na Portable) was originally a Japanese game maker August in September 22, 2005 on sale at the launch of a PC platform for over 18 years old players love adventure game. December 7, 2006 by the ARIA after the launch of PS2 version, it specifically for the platform part of the adjustment elements, such as removing the inappropriate parts replaced before the players over the age of 15 and so on. But this time ported to PSP handheld on the PSP handheld hardware features will be based on appropriate optimization and improvement. The PSP version will retain most prominent feature of this series is that we have a large number of ultra-fine setting of the game map, there are girls and Lolita like the United States players, but friends who absolutely can not miss these Mito Oh!