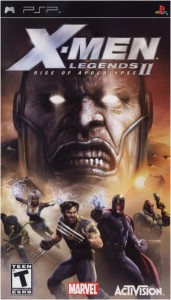 The X-Men team up with their sworn enemies, Magneto and his Brotherhood, to stop the greatest threat of all: Apocalypse. Activisionâ€™s X-MEN LEGENDS II: RISE OF APOCALYPSE for the PSP allows players to control both good and evil mutants in one of the most popular franchises of all time. The game begins with X-Men Wolverine, Storm, and Cyclops and the Brotherhoodâ€™s Magneto, Sabertooth, and Mystique saving Professor X from Apocalypseâ€™s prison. Apocalypse, one of the most powerful mutants in the X-Men series, has destroyed the mutant haven of Genosha and kidnapped four powerful mutants, including Quicksilver, Magnetoâ€™s son. He plans to extract their powers and incorporate them into his own, making him unstoppable. Players have 15 mutants to select their party of four from, including Gambit, Toad, Bishop, and Pyro. Each mutant has his or her own unique abilities and powers, and players will need to learn how to use each to get through certain areas. The game is divided into five stages, and the end of the first four, players will face off against one of Apocalypseâ€™s powerful henchmen, the Horsemen. There are also many more cameo appearances scattered throughout the game, and a number of unlockable extras like hidden characters, classic uniforms, and other skins. players can also play the game cooperatively, with up to four players joining in the mutant melee. But whether alone or with friends, X-MEN LEGENDS II: RISE OF APOCALYPSE is full of all the action, excitement, and mutant powers X-MEN fans love.