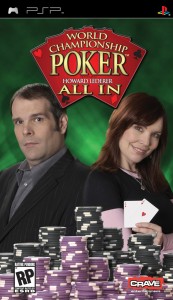 The third game in Craveâ€™s WCP series, World Championship Poker: Featuring Howard Lederer â€œAll Inâ€ is something of an odd third take for the series in that while it does offer a handful of improvements and new features, none of them actually stand out as being significant to the gameplay. In fact, most of what youâ€™ll see this year feels much like it did last year, which includes some of the gameâ€™s drawbacks.