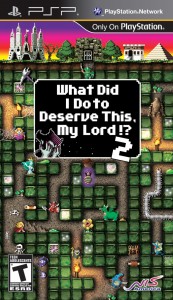 Readers may recall a bit of controversy back in February involving Batman, NIS America, and the very height of ridiculousness.Â  At that time, what was once slated to be Holy Invasion of Privacy Badman 2, Time to Tighten Up Security was forced to change its name to What Did I Do To Deserve This, My Lord?! 2.Â  The controversy faded quickly because in the main, people had no idea what this game was or what it was about.Â  I reviewed the first game back in October, butÂ by and large it was overshadowed by some silly little titles like Demonâ€™s Souls and Brutal Legend.Â  For the most partÂ readers were right to ignore that review because thisÂ one, much like the sequel to the first Badman, will keep to the same script whileÂ adding new features andÂ retaining 90% of what made the original what it was.

Download What Did I Do To Deserve This My Lord 2 now PSP ISO now !