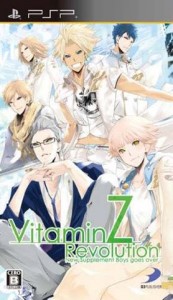 â€œVitaminâ€ series is the D3 PUBLISHER developed a special love for the female player adventure games, games with fresh comic style, described the place in the academy in the love story. Players will be the new incarnation of his post for the private elite female teachers, and classes for their own problems the most headache problem super guide students need in these handsome male students wandering a while to find their own contacts in, and coaching the students apply for student to complete college. The title â€œVitaminâ€ may mean â€œvitaminsâ€ or â€œLove of vitaminâ€ was intended. The series ended in 2009 so far, a total in the PS2 and NDS to launch the four works, including NDS of the â€œvitamin X: Evolutionâ€ is also the PS2â€²s port.

This time, the PSP handheld to launch â€œVitamin Z: Revolutionâ€ (Vitamin Z Revolution) is March 26, 2009 on sale in the PS2 platform, â€œVitamin Zâ€ (Vitamin Z) port. Of course the PSP version is not a simple console port, in addition to adjustment corresponding to 16:9 aspect ratio, the new ending for the OP and END will be re-produced, and many new additional content and CG images, a large number of deputy the story line. If after the date on, in particular, lecturers B6, chairman and meta-pro and so on, and the array of new teachers â€œGTRâ€ object for the Raiders.