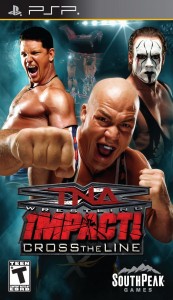 It may have taken two years for the portable versions of TNA Impact to finally make it to launch following the console release in 2008, but don’t expect to find many improvements or major changes in this handheld port. The extra time in the oven hasn’t made a real impact on pinning down and beating into submission the problems that kept the series debut from being the tour de force TNA wrestling enthusiasts had hoped for. Staying faithful to the machismo drama and intense man-pummeling action of TNA just isn’t enough when the gameplay so readily degenerates into repetitive and frustrating button mashing. Context-sensitive control issues and bastardly enemy AI also take a lot of wind out of the game’s testosterone-powered sails.