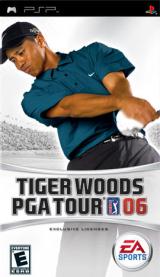 Tiger Wood fans can take their game on the road with EA Sportsâ€™ PSP title, TIGER WOODS PGA TOUR 06. The PSP version of the game contains an exclusive mini-game, 14 licensed golfers, including Tiger, and nine PGA courses like Pebble Beach and the Turnberry-Ailsa course in Scotland. Three PSP exclusive courses are also available. Players start out by using the impressive GameFace program to create their own golfer, combining features and accessories from the hundreds available. Once theyâ€™ve completed their character, players have several different gameplay options. The new mode for the 2006 version of TIGER WOODS PGA TOUR is Rivals mode. Here, players will battle through a series of tournaments, matches, mini games, and one-on-one challenges from the 14 professional golfers. Once players defeat their other rivals, they must go up against Tiger himself to prove that they deserve the number one spot on the leaderboard. The PSP version of the game contains an exclusive mini-game called Putting Frenzy. players score points by successfully sinking difficult putts on three exclusive PSP courses located in the tropical paradise, the Scottish highlands, and even Antarctica. The game also includes Wi-Fi multiplayer modes. players can challenge others in five different modes: match play, skins, stroke play, Bingo Bango Bongo, and in the Putting Frenzy. Up to four players can participate in the party play mode, which includes Putting Frenzy, 3 Hole Skins, and Playoff Rounds. With all of these options, golfers of all levels will enjoy TIGER WOODS PGA TOUR 06.