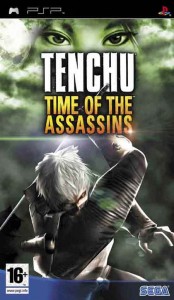 This PSP entry in the series has you as ninjitsu masters Ayane and Rikumaru in an all-new storyline that takes place immediately following the events of Tenchu: Fatal Shadows. Each character is tied to a different story, and each story offers different levels to play through. In addition to the scenario mode, there is also a â€˜free missionâ€™ mode thatâ€™s comprised of 50 independent missions to enjoy after you have completed the single-player campaign.

Tekken: Dark Resurrection is the best PSP fighter released for the system. It blows its competition right out of the water and everything about the title, from its graphics to its mini-games to its multiplayer options, are exactly what the PlayStation Portable needs. But letâ€™s take that one step further â€” Namco Bandaiâ€™s Dark Resurrection is also the best arcade Port yet available for Sonyâ€™s miniature platform, and even more impressively, one of the PSPâ€™s most outstanding pieces of software for any genre. Yes, itâ€™s that good.