In a story paralleling the next-generation console versions of the game, the PSP version will feature exclusive new content and all-new characters as Las Vegas finds itself in chaos and Rainbow operatives are forced to defend one of the most recognizable cities in the world. The future of Las Vegas and global security is in your hands â€¦ will you be able to save Vegas?
Download Tom Clancyâ€™s Rainbow Six PSP ISO Now ! 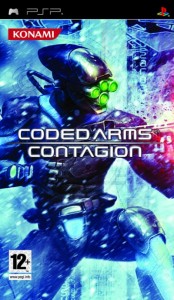 Coded Arms: Contagion thrusts players into a new cybernetic crisis where they must use their hacking abilities and an arsenal of high-powered weaponry to survive. As a lone security agent players will return to A.I.D.A., a virtual reality military training program, to prevent cyber-terrorists from taking control of the program and gaining access to classified military information.