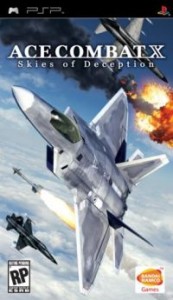 The first PSP entry of the series and a new game in the franchise, Ace Combat X: Skies of Deception promises everything youâ€™d expect of Namcoâ€™s flight simulation series, including detailed jet models, an original storyline told through CG, options for fine tuning your machines, and plenty of real world jets. In Campaign Mode, you play as a pilot in the Gryphus Squadron of the Federal Republic of Aurelia. Defending the invaded country, your mission will take you to the battle-filled skies in order to take down the enemy and restore freedom and peace to their homeland. Campaign mode makes use of the Strategic AI System, where the contents of a mission change based on the strategies that you select. The game also has a multiplayer mode for up to four players. In addition to a last-man standing dog fight mode, youâ€™ll be able to split into teams for cooperative combat.