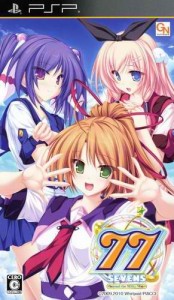 Japanese game publisher GN Software Producers and Distributors. Developed by the PIACCI, transplanted from the company in the PC platform Whirlpool launch of the game. New for winter 2010 is currently scheduled to launch in the AVG PSP handheld text adventure new work: “77: Beyond the Galaxy” (77: Beyond the Milky Way). At present for the official website has opened, and the release of the latest images of the game with some information for the players you refer.

At the beginning of Wii’s lifecycle we got word of an action-RPG that would be heading to Nintendo’s new system. After a bit of digging it turned out that SEGA’s Alien Syndrome was really a multi-console effort for both PSP and Wii. As it turns out, this one makes a better PSP game than it does a full console effort, and while Alien Syndrome still isn’t a must-have PSP title, it at least looks, feels, and plays like it was designed for its intended platform.

Few games actually change the way you feel about a platform. They take the established standard and tear it to pieces. Grand Theft Auto: Liberty City (LCS) Stories is one such game. It takes the preconceptions about what a handheld can do and totally ignores them. It provides an experience so large, so complex that it’s a wonder it actually runs at all. The GTA series has always reveled in sheer scope and complexity. Thankfully, it’s no different on the first GTA game on handhelds. And there are no hardcore sacrifices, either.