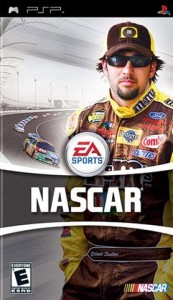 Feel the speed in your hands as you outmaneuver real-world NASCAR teams and battle for the checkered flag. Bump your friends and ignite a pileup with wireless multiplayer action for up to 4 drivers. Or race aginst the pack in a number of modes customized for PSP. The Season Mode here allows you to compete wirelessly in a 4 player racing season, forming a team in co-op racing (2 and 4 player). Lighting Challenge pits you against one of 31 different scenarios and must prove they have a solid grip on the wheel to earn Thunder Plates that unlock hidden drivers, tracks and paint schemes. Fight to the Top Mode is a multi-series racing experience as you fight to get on the best teams in the NASCAR Whelen Modified Series, the NASCAR Craftsman Truck Series, the NASCAR Busch Series, and the NASCAR NEXTEL Cup Series.