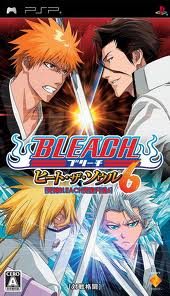 Bleach Heat The Soul 6 is by far the best Bleach game realesed the game play is amazing, the game is now uograded to 3D graphics and the characters and speical moves are 20x better then the last.Bleach Heat The Soul 5 had a quite was not that good a game you know (well thoseï¿½ who have played or seen clips on youtube or veoh atleast) because the story mode was not all that good it was just based in hueco mundo not the soul society or karakura town and it some characters that didn’t even go to hueco mundo in there lives but it was still good because now that BHTS6 is out it made me realize all of it’s falts because of the way the new 1 is.

“While many Bleach games havenï¿½t been released in North America, tons of have been released in Japan. One of the most popular series is the Bleach: Heat the Soul PSP fighting games. There have been seven so far, each one expanding on the last. The series began in March 2005 with the original Bleach: Heat the Soul, a rudimentary entry with a solid premise, even though it was lacking when it came to characters and the story mode.”