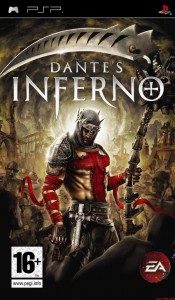 Dante’s Inferno is an action-adventure where players take a third-person control of Dante, the game’s protagonist, and engage heavily in fast-paced combat, platforming and environment-based puzzles. In the game, Dante’s primary weapon is Death’s Scythe that can be used in a series of combination attacks and finishing moves.

Dante’s Inferno tells an adapted story that focuses on delivering a blockbuster 3rd person action game experience while bringing Alighieri’s depiction
of Hell to the medium. Players assume the role of Dante, who descends into Hell after returning home to find his beloved Beatrice murdered, with Lucifer
seducing her soul into the underworld. Dante sets out on a rescue mission to save Beatrice, but he soon realizes he is also in Hell to face his own
demons and ultimately to redeem himself. Players take Dante through nine unique circles of Hell as mapped out and described by Alighieri: limbo, lust,
gluttony, greed, anger, heresy, violence, fraud and treachery. Each circle showcases its own distinct look, with demons, monsters, damned and geography
that are crafted straight from the poem’s vivid descriptions.

A kidnapped soul. A lifetime of sins. A journey after the depths of the despair. Based on the immeasurably influential classical poem, Dantes takes inferno you on a epischen search of the revenge and the payment by instalments by the nine circles of hell. They are Dante, a veteran of the crusades, which must hunt its loved Beatrice and attempt, in order to release its soul Lucifers of the range. Since your pursuit takes you more deeply into the pits of hell, you must at all more violent and to fight terribly, also, past confronting Monster-wÃ¤hrend their own sins, a dark family and your inexcusable war crimes.