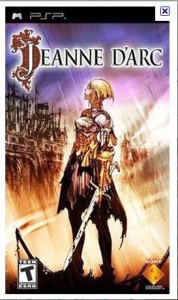 A stratey-RPG offering from the makers of Dark Cloud. Jeanne d’ Arc takes place in a fictitious world inspired by Jeanne d’ Arc (known more commonly in English as Joan of Arc.) The game’s background story begins far in the past, during a long war where dark gods attempted to use their demon armies to enter the human world but were stopped by five heroes. The story jumps forward to the 15th century AD as France and England battle during the 100 Years’ War. You play as Jeanne as a 17 year old girl. When Jeanne is attacked by a demon at a festival, voices encourage her to defeat the monster and take up the legacy and eblem of the five heroes. Together with friends Lian and Roger, she takes up the cause to lead France towards victory against attacking demons and the English army. Gameplay is presented in 3D turn-based RPG play, utilizing the unique character powers and game rules to determine your offensive and defensive strategies.

Three hundred years ago, five martial clans peacefully ruled Ohka, the center of the known world. In an attempt to gain total supremacy, the Kirin clan brutally attacked the four other martial clans to secure the Divine Swords, the symbols of absolute power. A young warrior named Shinbu, along with a girl named Suirin, are the only survivors of their clan.

Set in a vast, living world, players will learn to master five styles of martial arts and explore active environments in a crusade to defeat an evil clan. Kingdom of Paradise features more than 150 styles of programmable sword fighting, 15 types of Qigong martial arts, wireless multiplayer connectivity via ad hoc mode (plus downloadable content via infrastructure mode), and more than 20 hours of gameplay set in a fantastical world. 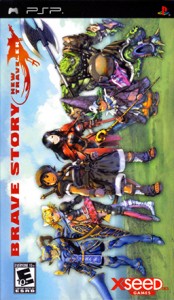 On a day that starts out like any other, an 11-year-old boy’s life is changed forever. As the main character and his friend Miki pass a leisurely afternoon, Miki suddenly collapses from an unknown illness. When the girl shows no sign of waking, the main character grows distraught over not being a better friend and not having the means to save her. Suddenly, a strange voice offers him a second chance: “Beyond the door you can change your destiny!” He soon leaves the real world and journeys to the world of Vision, where, as a novice “Traveler,” he will surmount myriad ordeals in hopes of ultimately meeting with the Goddess of Fortune to have a single wish granted.

Take on the role of an original main character and work through a story featuring Wataru, Meena and the rest of the main Brave Story cast. The game’s turn-based battle system focuses on three concepts from the original story: bravery, growth and friends. As you attack your enemies, you build up a Brave Power meter, which indicates your courage. Once maxed out, you can perform a special attack. You build up your weapons by collecting gems and can even perform combination attacks with your two battle companions.