Considering the renaissance the PSP has had in Japan, it wasn’t going to be long until Banpresto cottoned onto porting the old PS2 Another Century’s Episode games to the PSP. The imaginatively titled Another Century’s Episode Portable consequently covers much of the same functional ground as the PS2 games did (rather than that of the PS3 release, which changed much of the how the core game worked). 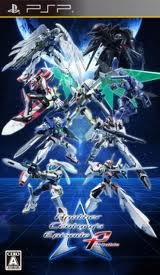