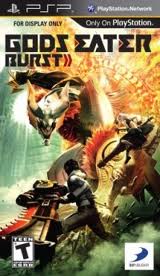 The earth has been plagued by terrifying mutant beasts known as the Aragami and manï¿½s only hope against them is the God Arc weapons and the God Eaters who wield them. Create your own hero and battle against many different types of these enemies, picking up items along the way to customize your weapons, guns, bullets and shields, boosting your strength and stamina in the massive scale fights.