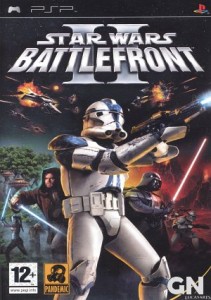 Star Wars Battlefront II for PSP is similar to its recently announced console counterpart with space combat, playable Jedi, and Star Wars: Episode III Revenge of the Sith content, yet it still boasts several distinct features meant to embrace the â€œon-the-goâ€ nature of a handheld system. The game includes several unique mini-campaigns as opposed to the much longer campaign seen on consoles. Players can join the Rebellion as a smuggler, work for themselves as a mercenary for hire, or use their Imperial sniping skills to rid the galaxy of pesky species like Jawas, Ewoks and Gungans. Wi-Fi compatibility permits up to four players to join in at once, either cooperatively or competitively, and they can also partake in classic Instant Action mode to fight their favorite Star Wars battles any way they want to.