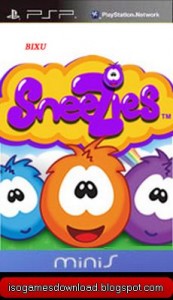 t’s unfortunate that so many Minis (try saying that 10 times fast) fall short of even being worth the time it takes to download — much less the cost to do so — that we’ve taken to just assuming everything will be a half-assed idea or a quick and dirty iPhone port. At this point, it seems Sony would have been better off making PlayStation Minis an XNA-style indie dev effort because frankly a lot of the actual concepts and execution are pretty much equal.

But not all hope is lost. Once in a while, someone takes an idea (we suspect from a game already done elsewhere first) and makes it work on the PSP. Case in point: Sneezies, a name that probably should invite just a bit of hesitation and maybe just a tiny smattering of chuckles but in truth is a genuinely great concept. As others in the office have mentioned, games on the iPhone have essentially done the same thing, but then they aren’t on the PSP yet, are they?