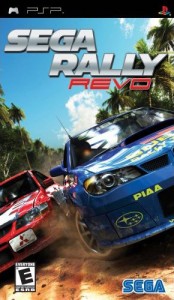 A handheld version of SEGA’s revival of the dirty and wild SEGA Rally franchise, this PSP version features 34 different cars and 16 tracks that span six different environments. Multiplayer offers play over the Internet via Infrastructure support for up to four players, and gamers can also play locally — you can even use one game for two players via the PSP’s Game Sharing feature!