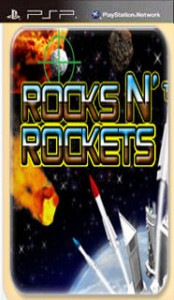 Missile Command was a 1970s arcade game that had the player defending cities from wave after wave of incoming nuclear missiles, by using their own defensive missiles, aimed by a track ball. It was a very popular game, with an edge to it that was really unmatched by anything else of the day, thanks to the Cold War fears of the time.

Rocks Nâ€™ Rockets steps back the nightmarish scenario a bit, in this you are defending various cities from falling rocks from the sky. Which is still bad, but not nuclear holocaust bad. It plays essentially the same, except the falling rocks come in different flavors. Or more accurately, different temperatures. Some of them are fireballs, some of them are iceballs. You need to use fire missiles versus the iceballs and ice missiles versus the fireballs. If you use the wrong sort of missile, it doubles in size.