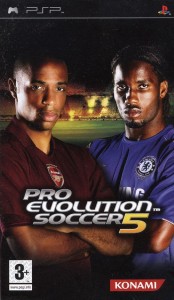 With Pro Evolution Soccer 5,
console football is even closer to the real thing. Both Thierry Henry
from Arsenal and John Terry from Chelsea are huge fans, and delighted
to be involved.

A further 10 licensed clubs have been added, among them Chelsea,
Arsenal, Rangers, Celtic, Galatesaray and Porto. All the licensed teams
in PES 5 are faithfully represented in authentic kits, including unique
number/name styles , and with astonishing likenesses to the players.