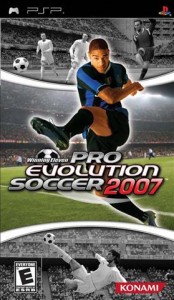 Take the field and experience the realistic, fast-paced action of Konamiâ€™s acclaimed soccer series. or take the reins of your favorite team with the in-depth Master League Mode. This 2007 edition features enhanced animation and collision detection systems that combine to deliver the most fluid gameplay experience ever for the series. Also look for new fully licensed international and league teams (including Argentina, Australia, Netherlands, Spain, and Sweden as well as new club teams), and improved loadtimes for much faster and immediate gameplay. The PSP game also boasts the newly-added robust Master League mode, which gives players even more control over their favorite team by allowing them to manage and train the players on their own soccer franchise.