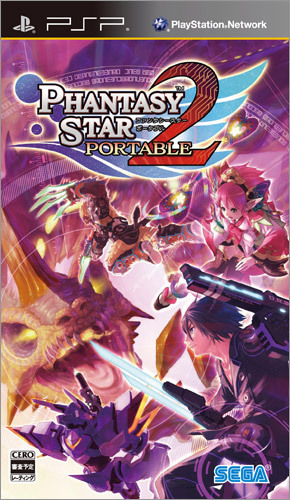 In many ways the PSP is starting to show its age. Even with numerous redesigns, it seems to be losing ground to the competition, as handheld gamers are ready to move on to the next thing –whether that “next thing” is touch control or 3D. But the PSP can still pull off tricks that just aren’t possible on other devices. For example,Â Phantasy Star Portable 2 is a subscription-free MMO in the palm of your hand.

Phantasy Star Portable is somewhat based off of Phantasy Star Universe from the consoles. Anyone familiar with the franchise will recognize the content immediately and gamers who played the first game on the PSP will remember that it had a number of notable problems. The presentation was lacking, and it didn’t have an “infrastructure mode,” meaning you couldn’t play with others over the internet, only over the local wireless connection. Both of these issues have been addressed, making the sequel far more attractive.

The game starts out with a story mode that introduces some genuinely likeable characters and a mediocre story that acts more like a giant tutorial, at least for the first 10 hours. Players create a character (and there are plenty of visual options) and choose a class that carries over from single-player to multiplayer and back again. They are then introduced to their home base, a space colony where a group of mercenaries called Little Wing make their home. Here you find your room, office, shops, eatery, and teleport terminal where you can take on new missions. The surroundings are simple enough but they house a bevy of options.

Players can decorate their room, upgrade weapons, trade for rare objects and converse with the locals who usually have something new to say. I found character management to be deep and rewarding, with plenty of ways to improve your skills and weapons. Playing as a Vanguard, I found Phantasy Star Portable’s greatest strength to be its accommodation of players who can’t make up their mind. Players can either change or extend their class at a shop using extend points. Your class dictates how many points it costs towards each weapon class. At any point you can remove points from one and put it toward another, if the item is outside your class it just costs more. Experimentation with different weapons kept me interested in grinding levels and collecting a whole new set of weapons for hours on end. 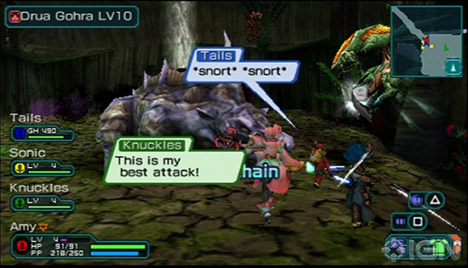