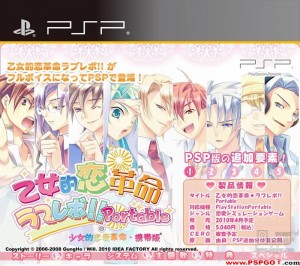 The new PSP version of a â€œgirlâ€™s love revolution: Portableâ€ (Otometeki Koi Kakumei: Love Revo Portable) was originally by the Japanese game maker GungHoâ€™s January 26, 2006 on sale at the PS2 launch a platform AVG love adventure game. PS2 original name of the game as â€œgirls love revolutionâ€ (Otometeki Koi Kakumei * Love Revo). Subsequently launched in March 2008 version of PC Transplant; February 2008 launch of NDS Port version, players have received acclaim. But this time ported to PSP handheld on the PSP handheld hardware features will be based on appropriate optimization and improvement. The new PSP as a handheld adaptation of the game will be the original 4:3 image adjusted to 16:9, while the PSP version will retain most prominent feature of this series is that we have a large number of ultra-fine setting of the game map, there are like the U.S. girls and loli friends of the players, but absolutely can not miss these Mito Oh!