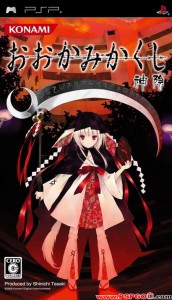 Japan KONAMI Company production, distribution, sale scheduled for autumn 2009. By the portable PSP exclusive to Legends of the mysterious adventure of life in the new AVG text adventure: “Spirited Away” (Ookami Kakushi). For the production of the luxury line-up also, the original game as well as the director from “cold at the time of weeping Higurashi trip” series 07 as the Dragon Knights, the role of design from “Rozen Maiden” and “guardian of Honey” are set up as PEACH-PIT, and music by Kenji Ito game as a (representative of “Legend of Mana” series of music, “Sharjah” series of music, “Green space under the agreement,” music, etc.), is strong. At present, the official website for the official opening, and release the multi-screen promotional video and the latest information for your reference player.