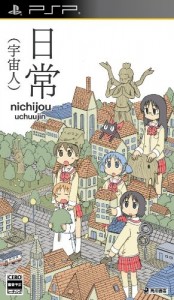 This action game centers on a young man, known only as the Nichijou was a popular manga published by Kadokawa initially in 2006. In March 2011, the sixth volume of the manga made its way to market which featured the escapades of a group of high school girls. Drawn in popular “moe” style, the students (Yuko, Mio, Mai, and Nano) are wide-eyed and engage themselves in odd situations which are conducive to hijinks and hilarity.

The PSP game is an interactive “Daily Life” adventure which spans 24 scenarios. Preorders are welcome for the Regular Edition of the game as well as a Limited Edition which includes a bonus DLC code, a deck of hanafuda playing cards, and a set of three cellphone straps featuring the characters of the franchise who are each accompanied by a black cat.