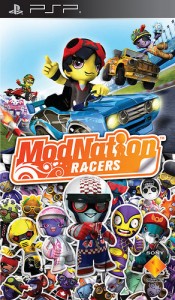 Players are able to accelerate and drift similar to other racing games in the kart-racing genre, in the game successful drifts also allow players to fill their boost meter. The meter resembles a multi-tiered thermometer which allows players to the choice of activating a turbo boost to increase the kartâ€™s speed or a shield to protect their kart from incoming attacks. Players are able to collect weapons as they race which can be upgraded to up to three levels of power, weapons include sonic attacks, missiles and lightning strikes.