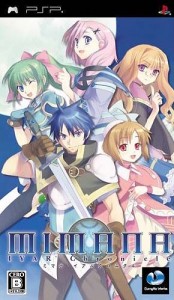 I wonâ€™t say that Mimana is a terrible game.Â  It has its moments.Â  However, the word mediocre feels appropriate for most of it.Â  I had the feeling at several points that I was playing some senior student developerâ€™s end of the term project.Â  It hit all the major points well enough, but lacked any real spirit or catch to set it apart from anything else.Â  It did get better as I travelled along with my nearly all female group, but the rocky start never launched into the heart-warming JRPG that it tried to be.