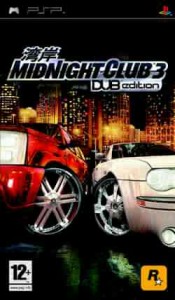 Midnight Club 3: DUB Edition digs deeper into stylistic and performance customization by offering hundreds of after-market parts to tweak and personalize vehicles, and it gives gamers more than 50 fully licensed vehicles with which to drive, race and crash into smoldering piles of flaming metal. You can customize your licensed vehicle, paint it, color shift it, switch out rims, and all sorts of engine parts, and then take your perfectly stylized vehicle and bash it up. Races take place in cities with lots of alternate paths and some realistic roads going through them. Detroit, San Diego, and Atlanta have all been chosen as the ideal locations to race these beautiful cars. Rockstar has partnered with the car/celebrity magazine, DUB, which focuses on modifiable vehicles, parts, rims (actually, it seems it focuses mainly on rims), and the celebrities, racers, and athletes who drive them.