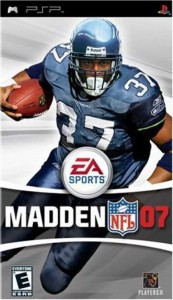 The 2007 edition of EAâ€™s unstoppable football franchise. The 2007 edition of EAâ€™s unstoppable football franchise. In its 17th installment, you control the running game like never before. For the first time ever, step up as the lead blocker to create a hole, and then take control of the tailback and smash through, overpower, or slash away from would-be tacklers as you fight for every yard. Innovative rushing controls give you a game-breaking ground attack featuring all-new jukes, cutbacks, and the distinct running styles of your favorite backs.

The PSP version features exclusive Mini-Games â€” return kicks, avoid tackles, and aim for the High Score in an PSP system-exclusive mini-game. Also featured is PSP to PlayStation 2 Connectivity, where you can transfer an entire season in Franchise mode from your PlayStation 2 to your PSP system.