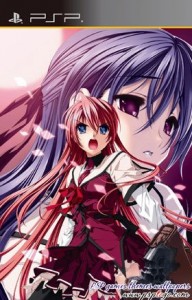 he new PSP version of a â€œgirl in love with Guardian Shield: Family Editionâ€ (Koisuru Otome to Shugo no Tate Portable) was originally a Japanese game makers AXL in June 29, 2007 on sale at the launch of a PC platform for over 18 years old Love adventure game players. The original name of the game for the PC â€œlove girls and Guardian Shieldâ€ (Koisuru Otome to Shugo no Tate). Since November 20, 2008 by the Alchemist after the launch of PS2 console version, specifically for the platform on the part of the adjustment elements, such as removing the inappropriate parts to other players for over 15 years of age. And the migration to the PSP handheld, the PSP handheld hardware features will be based on appropriate optimization and improvement. As to adapt to the new PSP handheld game screen to adjust the original 4:3 images to 16:9, while the PSP version will retain the best features of this series is to have a large number of ultra-fine game set graph, like the girls and the United States LORI friends, players can not miss these beauties, but oh!