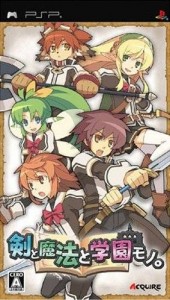 New work “The Sword: Magic and Gakuen 3” (Ken to Mahou to Gakuen Mono.3) series is a lovely maze of characters and a rigorous contrast formed between the two for the charm of “first-person perspective 3D view role-playing RPG Labyrinth Games. ” The majority of players in Japan for praise, and even produced a radio show widespread. The new work will not only launch PSP handheld platform, and even home consoles PS3 platform will debut there like this for the players not to be missed!

Second, new work description:
The Zheci Zai “Sword: Magic and Gakuen 3” in, Chule carrying Ke Yi Rang players Men Zihangjueding between partners who are chummy, “Xiang Xing Ji Tong” outside, while 3 Dai Zhong Huan Tigong 10 Zhongzu, three kinds of Zhifu , each of the two kinds of content sex position, four kinds of hair with eight kinds of hair color, plus 20 kinds of audio options, combined total of up to more than 75,000 types of combinations for players to freely create their own unique characteristics of the role. Also present at the official website, is scheduled to be released starting from the 2nd generation players have been very well received by the “painted diary” feature, interested players may wish to note that the official website of the publication at any time.