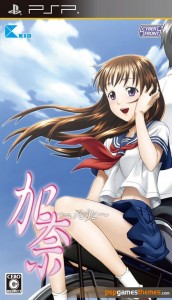 It’s a visual novel. It’s actually another remake of Kana Imouto which uses the original artwork from 1999, not the artwork from the first remake Kana Okaeri from 2004. Being a PSP game means the sex scenes from the PC version will be removed, which may increase the chances of people buying this game (again) in America. The game will still scare Americans because it may or not contain incest. After playing the PC version, I didn’t think the game needed sex scenes anyway.