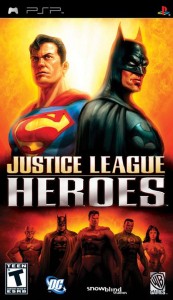 Only with the joined forces of the globeâ€™s greatest superheroes can the evils of the world be stopped in this game based on the comic book series from DC Comics. Brainiac and his villain cronies have a master plan to conquer the world and eliminate the Justice League forever. Now, Batman, Superman, Wonder Woman, The Flash, Green Lantern, Martian Manhunter, Zatanna and a host of other superheroes must join together to save the world from this legion of notorious villains. Each hero possesses an array of character-specific, upgradeable superpowers resulting in unique controls and fighting-styles. Engaging in one-to-two player cooperative combat, gamers will be able to customize and master these superpowers as they travel through interactive and destructible environments spanning the farthest corners of the universe.