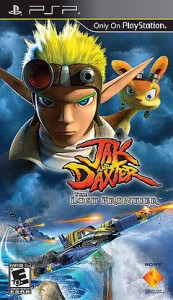 Daxter is reunited with Jak in Jak & Daxter: The Lost Frontier, a 3rd Person Action/Adventure game that picks up their story where the original trilogy ended. When their world begins to run out of Eco, Jak and Keira travel to the edge of the world in search of the ancient Precursor machinery that could reverse the planetâ€™s decline. They’re not the only interested factions out on the Brink, however; Jak must contend with Sky Pirates while struggling to control his own Eco powers.

With trademark Jak & Daxter game play, players will manipulate light & dark eco, engage in vehicular combat, and wield a customizable gunstaff, Jak’s weapon of choice. With intense sky battles and attacks on behemoth capital ships that comprise nearly half the game, players will earn frequent rewards and raw materials to customize his aircraft.