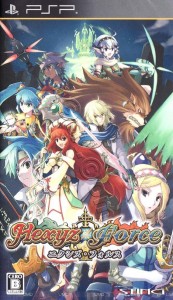 Hexyz Force is an RPG that gives players the reins over Cecelia or Revanto at the outset and each protagonist goes through a unique storyline that eventually unites the two in a cooperative mission to defeat a dark overlord. The two heroes command a motley yet mighty cadre of warriors known as the Hexyz Force whom are arranged in 3 x 3 battalions on the battlefield to tackle monsters and opposing forces.Â The attacks are turn-based with the party members getting a chance to strike or use magic in every round against a contingent of enemies. Each blow or magic blast is shown with a short animated sequence which conveys some semblance of conflict during the skirmishes. After each successful encounter, a “Triumph” screen appears which tallies experience gained and any level-ups for the characters. The Triump screen is accompanied by the words “The Hexyz march onward in victory, their hands held high” which scroll on the top and bottom of the screen.