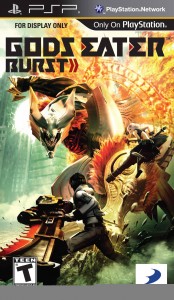 Let’s all put aside the odd fact that the “Gods” in “Gods Eater Burst” is plural. In doing so, we can avoid scratching our heads hard enough to draw blood.
Think about something more important. For example: why are you eating gods? Because the world is dead, and it’s your job Of course, you’re not actually
killing and eating gods in Gods Eater Burst. In this devastated world, mankind has been wiped out by a powerful new organism collectively called the
Aragami (a Japanese term invoking gods and demons). The organisms devoured other life in order to survive, assuming different forms in the process.
Only a few factions of humanity remain, and they’ve been united under Fenrir, a military organization intent on rebuilding the world.