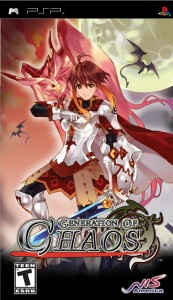 Idea Factor’s first PSP title is based on the PS2 version of Generation of Chaos IV, but with a new storyline. Your goal is to collect powerful allies and both protect your kingdom and invade enemy territory. When heading out to battle, you can carry up to 29 troops in addition to your general, meaning massive 30 versus 30 battles await.