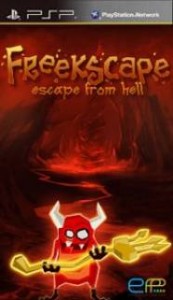 Get the hell out of hell â€” thatâ€™s your objective in Freekscape, a fun little puzzle platformer joining the PSP Mini family. You control a demon named Freek who doesnâ€™t enjoy being evil as much as the other beasts. Heâ€™d rather hang out with the good guys in Heaven, so after finding a holy trident, heâ€™s off to ascend to a better place. This is a 2D platformer, although characters and environments are rendered in 3D and the world will often twist and spin as you make your way through hell.

Freekscapeâ€™s big trick is that Freek can spear enemies with his trident and then utilize their unique abilities. Some can be used as a pogo stick to reach higher platforms while others can be dropped over hot lava in order to create safe passage (apparently Freekâ€™s good heart has made him vulnerable to the natural environment of hell). In each level youâ€™ll need to figure out how to make use of the enemies wandering around so that you can reach the exit. If youâ€™re knocked off a platform or fall into lava, youâ€™ll simply respawn at the last checkpoint you passed, so youâ€™re free to experiment without worry of punishment. Freekscape can be tricky, but itâ€™s also satisfying when you finally figure a puzzle out. Like any good platformer, there are also plenty of jumping challenges.