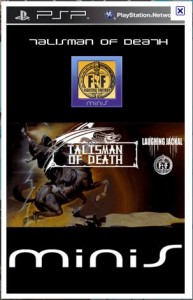 In Talisman of Death, the once peaceful world of Orb is in terrible danger. Dark forces are at work to unleash the awesome might of the Evil One. Your mission is to destroy the Talisman of Death before the dark lord’s minions reach you. But beware! Time is running out…

To keep both existing fans and newcomers happy with their treatment of the license, developer Laughing Jackal have included ‘Classic’ and ‘New’ game modes. The ‘Classic’ game mode very closely emulates the format of the original books, while the ‘New’ mode adds a range of all-new features to really capitalize on the console medium, providing greater visual excitement and giving power to the player, rather than to arbitrary “virtual dice rolls” which the player can’t influence.