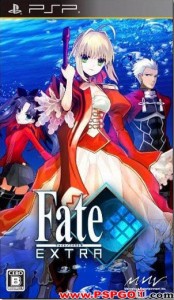 Some time ago, “the fate of the Night” (Fate) has just released the news release in early 2010 Movie, FANS do extremely pleased. The good news is also more than that, the recent developer TYPE-MOON has jointly issued by MMV open a series of game-oriented events. But this time with the players to meet this â”€ â”€ â”€ “Night of Destiny: The new chapter” (Fate: Extra) is neither a sequel nor a rumor, but rather to explore the maze-type RPG role-playing shape for the new stage is entirely new, the following Let us be rushed to unravel the veil of this bar!

The game production team mainly from TYPE-MOON Inc., the agency representative works are: “Moon-hee”, “Fate” series and so on. The new work, “Night of Destiny: The new chapter” of the game play is written by Kinoko Nasu supervision of its representatives as the “Night of Destiny: the Holy Grail War” (Fate: Stay Night), “an empty realm” series, etc.; were established to supervise the played by Takashi Takeuchi, representative of “Moon-hee,” “Space of the state” and so on; this made the director Kadowaki Muneyoshi, its representative: “Blue Dragon” and “brilliant Testament 2” and so on; production of the people, and go to the new Nagorno-Zai, his representative: “World Tree Labyrinth,” “Seven Dragon Wars” and so on. In addition, the game’s theme song have been identified by ALI PROJECT (members include: Po wild Yali China and Katakura three also) to sing, I believe, will soon open a specific track.