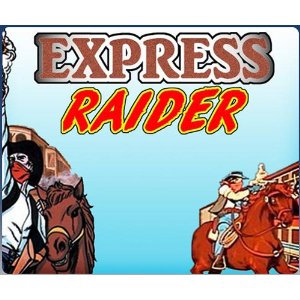 Originally released by Data East in 1986, Express Raider is an arcade classic. You are a train robber that is attempting to reach the front of the train so that you can steal bags of money. Some stages require the robber to run across the top of the train, jumping from train car to train car, as the robber fights a variety of enemies on the way from the caboose to the engine. In other stages, the robber rides a horse and takes out obstacles by shooting his gun and ducking shots from the enemies inside the train. Many gamers will fondly remember this wild west adventure and new gamers will love the great gameplay. We hope you enjoy this gallop down memory lane with Express Raider!!!