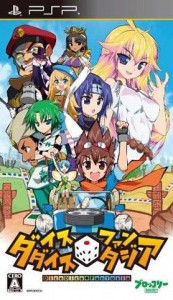 The goal in Dice Dice Fantasia is to try to clear an assigned quest, which is usually to collect certain special items or spoils and drop them off at a specified temple location. Players choose a character, who appears on board riding in a cute little go-kart, and set out, encountering special events, random battles and such. Thereâ€™ll be three modes â€“ Story, Free Play and Ad-Hoc Communication. Up to four Players will be able to jump in and play along if they have the game.

When it comes to battles, it your character isnâ€™t really the one fighting. You have soldiers serving and working with you. and they deal most of the damage to opponents. As for how it works, itâ€™s sort of a turn-based, card battle system with a die determining attacks. When a battle begins, you see a card on the left with the opponentâ€™s picture on it and its hit points underneath. Your four chosen cards then attack in order, dealing damage to the enemy. (You set the order of your card soldiers before battles.) The dice part comes into play once you choose â€œattackâ€ or â€œstrategyâ€ to deal damage. Youâ€™ll then have to press again to see just how much you do to the opponent.