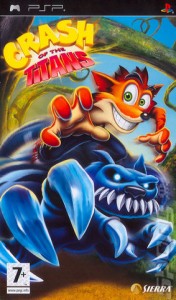 Oh Crash Bandicoot, you were never popular enough to hang around with the cool kids like Mario and Sonic, and yet you’ve still avoided that
depressing mascot retirement home where the likes of Aero the Acrobat and Zero the Kamikaze Squirrel reside (look them up if you have no idea
who I’m talking about). However, as spotty as some of Crash’s adventures have been in the past, there is still something likeable about the
slightly deranged marsupial. Maybe it’s because he looks like he stuck his finger in an electrical socket while biting into a lemon. Yeah, that
might be it.

Download Crash Of The Titans [US] PSP ISO Now !