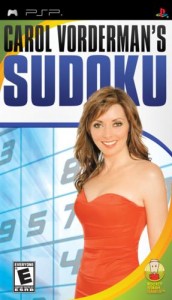 Channel 4 Countdown presenter and best selling author Carol Vorderman presents this version of the addictive and challenging puzzle craze that has swept the globe. Sudoku challenges you to fill in the missing numbers in a 9Ã—9 grid. Itâ€™s a game of reasoning, that doesnâ€™t require calculating or special math skills â€“ but instead focuses on concentration and brain power. Let Carol take you step-by-step via live action video explaining the methods of Sudoku and revealing her handy hints so that you too can become a Sudoku master. If you feel youâ€™ve mastered the methods of Sudoku then the game will allow you to lay down the gauntlet and challenge her to the ultimate Sudoku showdown. Also features are multiplayer gaming and several different modes of play.