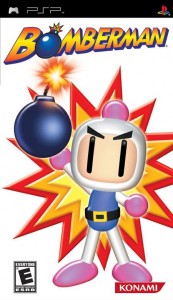 Players embark on a new adventure as an ominous black shadow is creeping towards Bomberman’s planet and sudden attacks by a mysterious robot army have brainwashed the inhabitants of the galaxy. Bomberman can now utilize a new item storage system that lets him use collected power-ups at any time to make the most of any situation that comes his way.

Besides a brand new story mode, Bomberman for PSP also includes a Classic Mode of over 50 different levels based on the original Bomberman game. And, as multiplayer is always a must for Bomberman, the PSP version lets players enjoy frantic four player wireless battles across a variety of play modes. Players can customize the parameters of each match, choosing from more than 20 different environments and a wide variety of items to keep players on their toes. The game also features game sharing, allowing up to four players to enjoy the game’s full multiplayer mode with just one UMD.